A folding camera build in West Germany in the American Sector.

The Franka Solida III advertisement is a nice Medium Format Folding Camera.
Its design is the standard bellows design of its time.

The Camera is lightweight and fits into a pocket when folded.

Before I tell you more here are the (what I think) most important specs of the Franka Solida III: 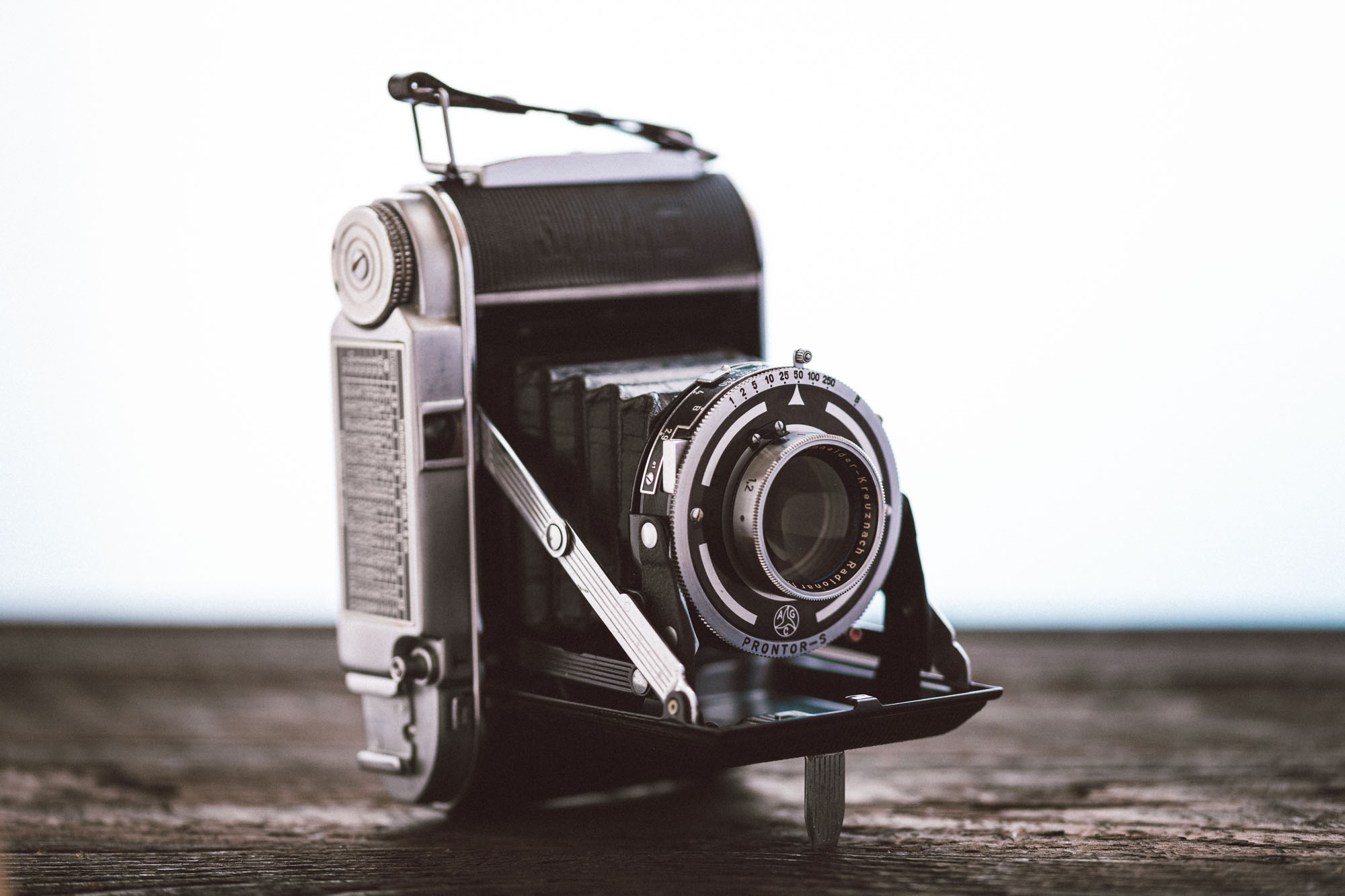 A Quick Guide on how to use The Franka Solida III

After inserting a film into the Camera you obviously need to unfold it, therefore you push the little button on the bottom left of the camera next to the screw mount (Image below). Attention, the camera will unfold automatically.

Now that the camera is Open, you can watch through the viewfinder and compose your image. You will see that by watching of through the viewfinder of the Franka Solida III, a part of the image is covered by the lens and also you will not be able to determine the depth of field since it is a very rudimentary viewfinder. Also, there is no built-in light meter, so you will have to use an external one as well.

So how to focus? 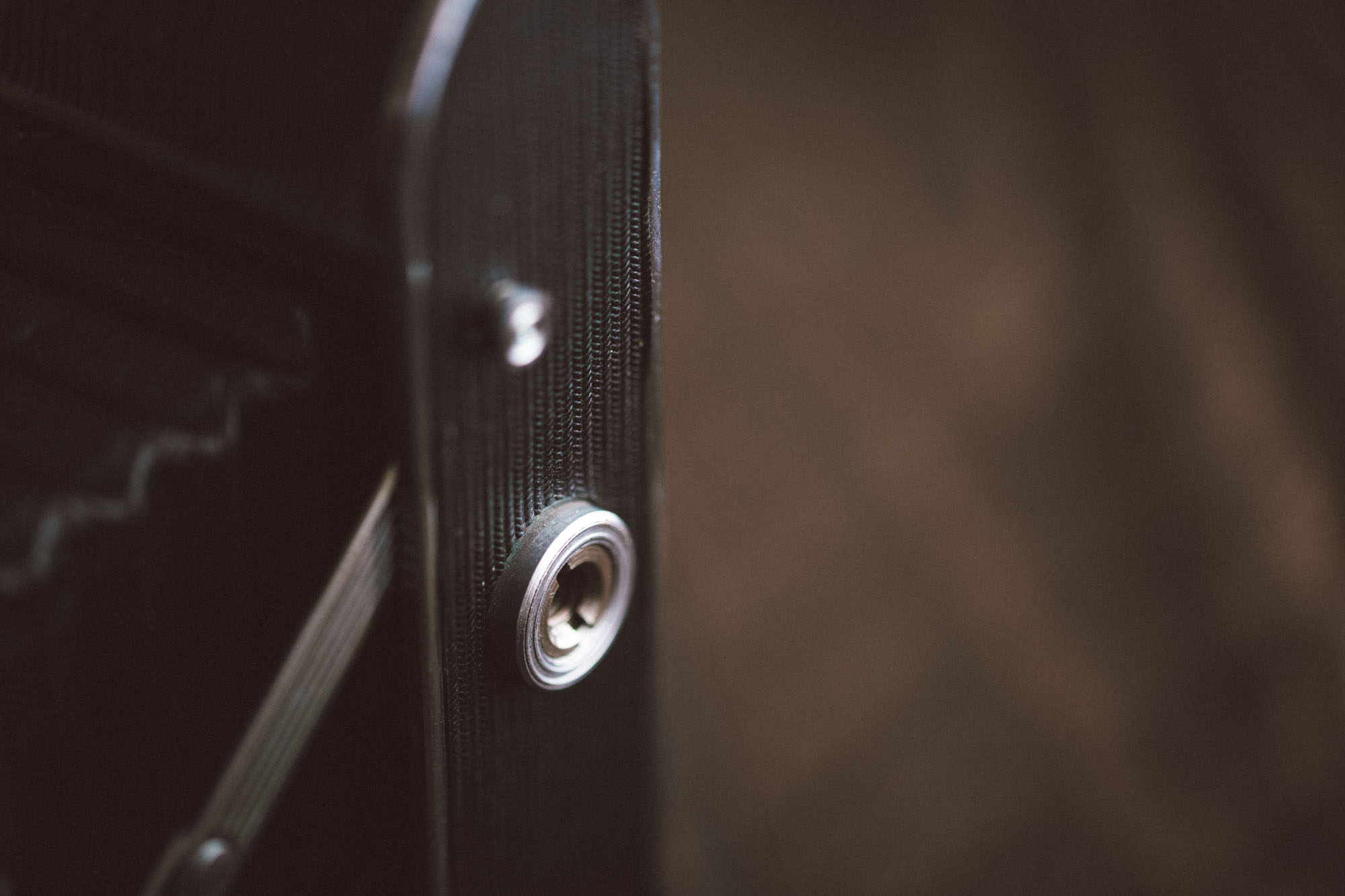 Focusing on the Franka Solida IIIadvertisement

To correctly focus the image of the Franka Solida III there are two options:

1. You can estimate the distance between you and the subject and choose the corresponding settings at the front of the lens.
2. You can buy an external Range finder such as the Watameter advertisement or a BLIK from the Russian company LOMO advertisement . You use these range finders to determine the correct distance and set the corresponding settings on the lens. (image below)

All you have to do now is to take your light meter readings, focus the picture crock the shutter and take a shot. 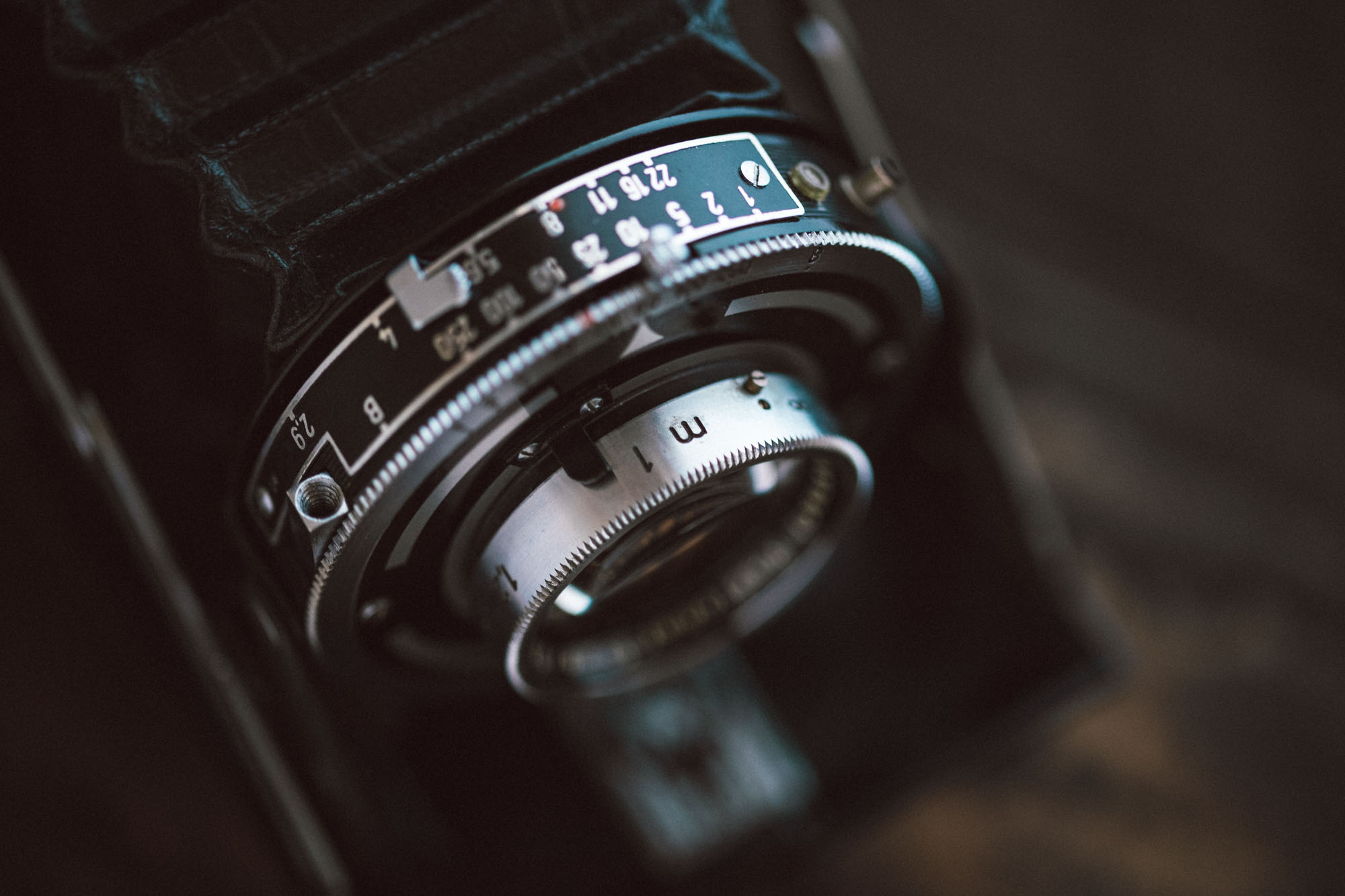 The Small red Window on the back

on the back of the camera, you will find a small red window (image below). This window is covered on the inside by a piece of metal, showing the film and image format. If you remove the cover you can see the number of the picture on the film. It also helps you to correctly forward the film to the next frame. Don´t forget to close the red window again (with the lever under it) so no light will accidentally enter the camera. Do not trust the red window to much!

You forward the film by using the turning wheel on the top left of the camera. An arrow shows you the right direction. 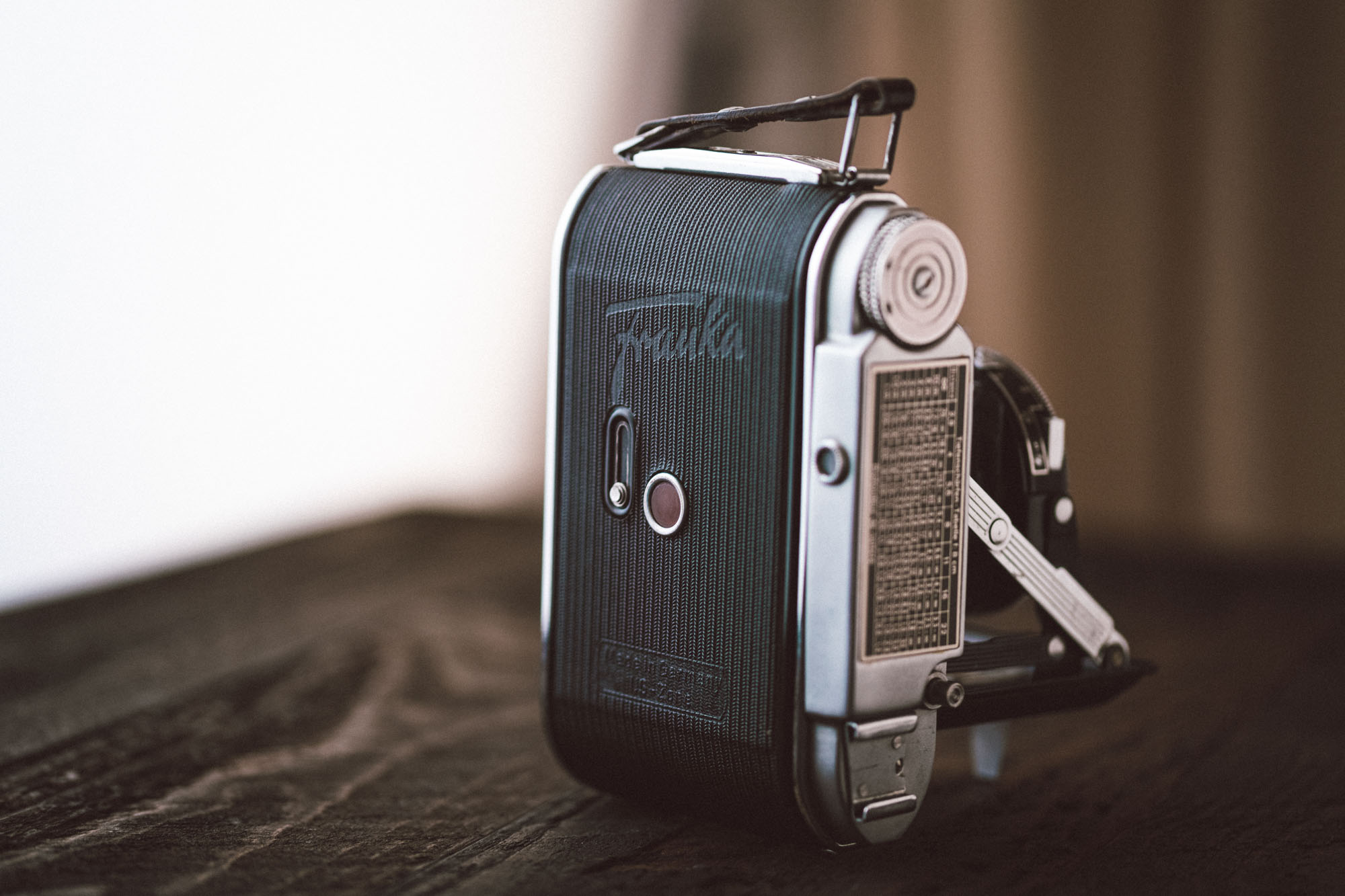 The scale at the Top

The scale at the top of the camera (image below and above) shows you the depth of field to be expected at the different lens settings and distances. 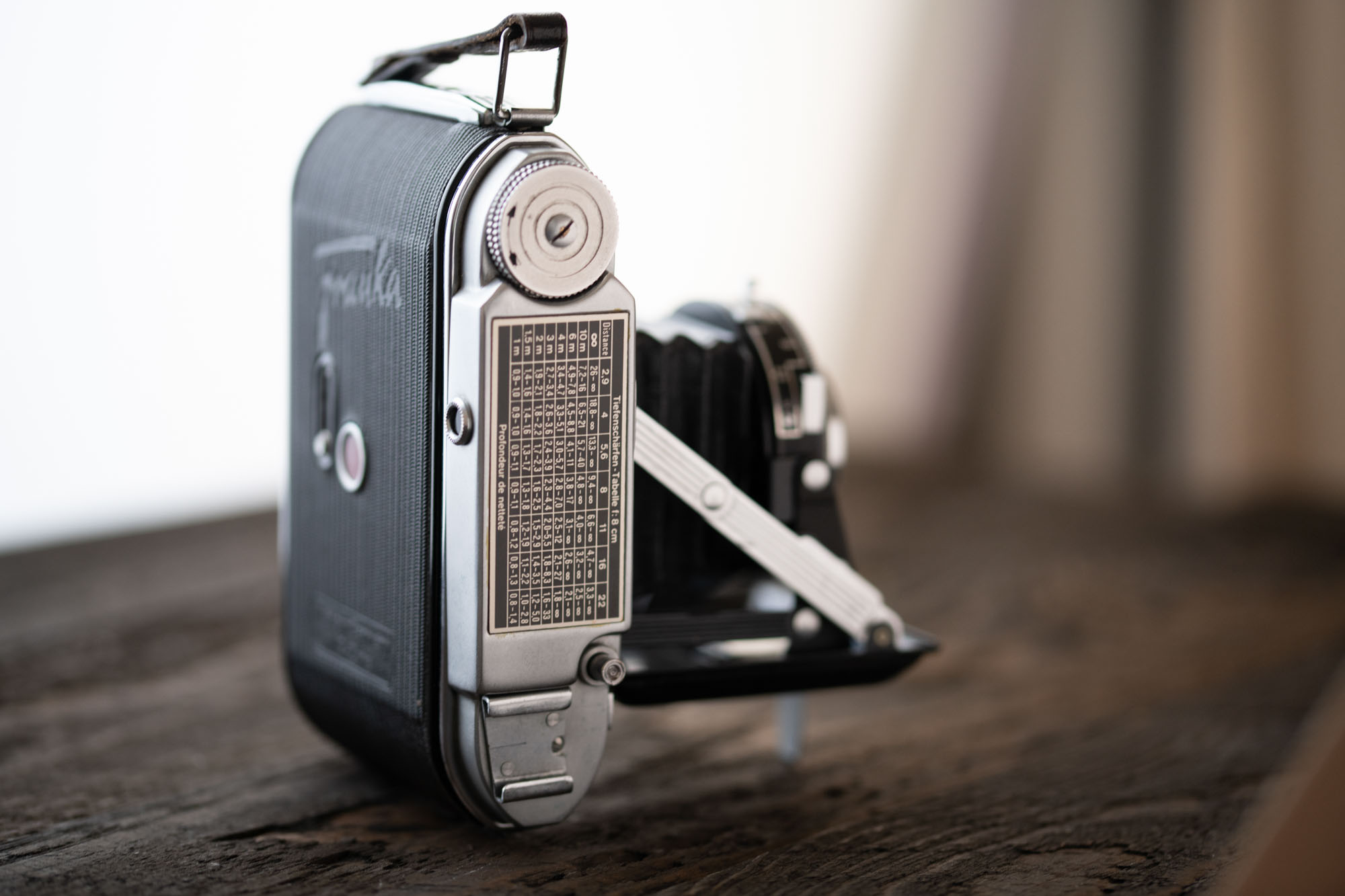 To use the Bulb mode set the lens to “B” now you either have to use a cable release or you use the small lever at the front of the camera next to the “T” (See the first picture under the header image). Push it towards the “T” (as the arrow suggests), when you now release the shutter it will stay open until you move the lever back to the right (its initial position). 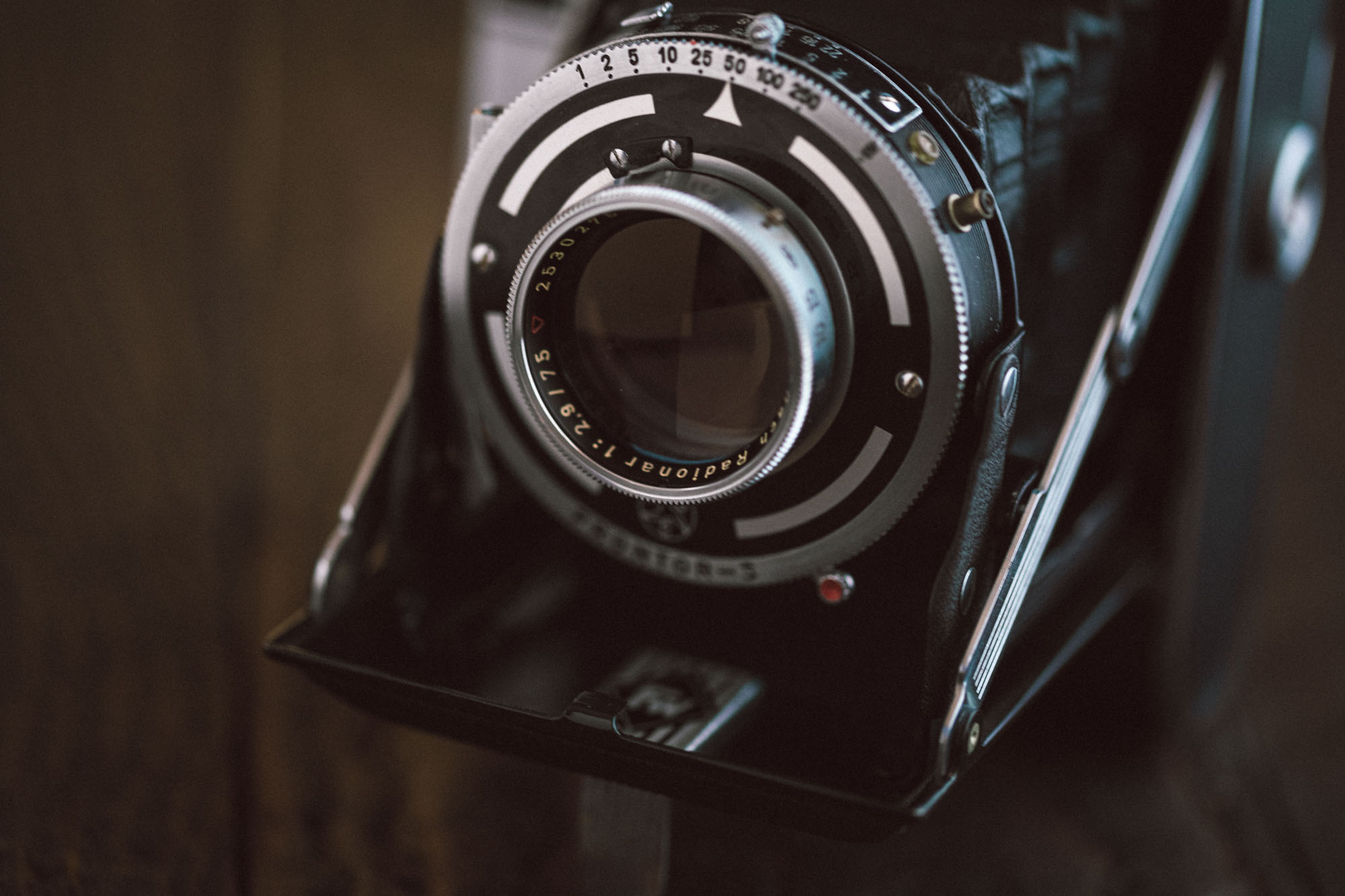 Some things to keep in mind

The Franka Solida III was build around the year 1951, so it is just normal that when you buy such an old camera off of eBay, that it could have some minor or even major issues. Mine, for example, had: a hole in the bellows, mould in the viewfinder, fungus and haze in the lens, tow shutter blades that came loose and the shutter speeds were off by 3 seconds.

That all is no reason not to keep the camera and with some use of your favourite search engine, you will be able to repair all these things by yourself most of the time.
If you are lucky, the fungus has not damaged the coating of the lens yet (if there is any) so you can completely remove it without any fungus skeletons remaining (use alcohol and or hydrogen peroxide 3%). To get the shutter speeds back under control most of the time you just need to clean the lens, with either lighter fluid, alcohol or both. Just make sure to remove the lens elements first and fire the shutter sometimes during the flushing and drying process.

Below you will find some pictures made with the Franka Solida III advertisement after maintaining it. Note I do not own an external range finder. so i estimated the distances.

Some images taken with the Franka Solida III